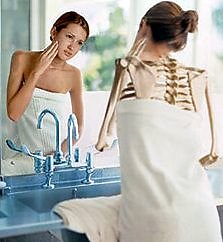 Eating disorders involve a disturbed relationship with food, through which a psychological conflict is expressed. This conflict involves regressed needs for love and nurture, which seem to threaten a need for independence and self sufficiency, which in turn seek to suppress and deny those regressed needs. Anorexia, bulimia, and compulsive eating, occupy different positions between the extremes of this conflict. Anorexia perpetrates a vicious attack on any sense of dependence and need, and denies that there is anything that needs to be nourished within. Compulsive eaters, at the other extreme, are overwhelmed by the feeling of an emotional hole within themselves. The food that people with this disorder stuff themselves with is an attempt to fill that hole with a substitute for the love and nurture that they felt deprived of at an early age. Their stuffing is sometimes experienced as an aggressive attempt to stuff away this emotional hunger. Bulimics are constantly torn between the two extremes, and on giving way to a binge, the food in their stomach is effectively ‘poisoned’ by their own self hatred. On purging (or subsequent self stavation), there is a sense of relief and a swing towards the anorexic side of the equation in which they can feel virtuous for rejecting nourishment.

In reality a person may occupy different positions on the eating disorders spectrum at different times in their life, and there may be many individual variations on the general theme.

The origin of the eating disorder can generally be traced back to problems in early attachment during the first few months of life. Subsequent relationship pressures, particularly in early adolescence, can lead to a sense that their true nature is unacceptable and unlovable, and that this needs to be replaced with a manufactured personality which fits with the expectations of others.

My approach is to explore how the eating disorder is expressed in the therapeutic relationship, and what is involved in allowing the authentic personality, which has been suppressed, hated, and somatised, to be expressed. Dreams, painting, and symbolic expression can be a valuable tool in facilitating the natural healing capacity of the psyche in this regard. 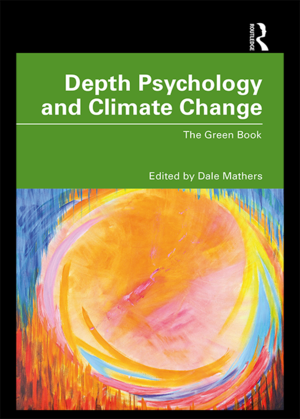 Depth Psychology and Climate Change - The Green Book
Chapter 9. At war with the natural world: nature as Other
Edited By Dale Mathers and published by Routledge.

"Depth Psychology and Climate Change offers a sensitive and insightful look at how ideas from depth psychology can move us beyond psychological overwhelm when facing the ecological disaster of climate change and its denial. Integrating ideas from disciplines including anthropology, politics, spirituality, mythology and philosophy, contributors consider how climate change affects psychological well-being and how we can place hope and radical uncertainty alongside rage and despair."

"This book will be essential reading for analytical psychologists, Jungian analysts and psychotherapists, as well as academics and students of Jungian and post-Jungian studies"